Departing IKIRU to live Surabaya guesthouse, we headed to Juanda Surabaya Airport early morning. It took about 1.5 hours from Surabaya to Balikpapan, then another 1 hour from Balikpapan to Berau. I was surprised with the both airports in Balikpapan and Berau. They were new and clean. Balikpapan airport was huge and pretty.

Our driver waited for us in Berau Airport. We met other travellers, 2 couples and 1 older guy, Mr. B. Two cars took us for 2.5 hours drive to Tanjung Batu Port where we paid 15,000 rupiah (not really sure for what, somekind of tourist fee to Derawan), then the speed boat took us for 30 minutes ride to Derawan Island.

I imagined water cottage as luxury accommodation, as I saw often in commercials for Maldives, but the water cottages in Derawan were more casual. Since Derawan Fisheries was full, four of us were relocated to nearby hotel called Miranda, which was newer, so we were happy.

There was no tour activity on day 1, so we had time to walk around Derawan Island. With my sister, we walked passing the main street, full of restaurants and souvenir stalls, went to the famous Derawan Dive Resort at the east of the island.
Further east, there was a big "Derawan" letters, good photo.
We walked along the shore, seeing some turtle heading up on the sea surface, passing some resorts, before going back to the main street from the public port.

During dinner time, while we were served with simple fried fish and fried tempe, the tour group in the same dinner room were served with lobsters. We asked people how to buy the lobster, and informed that we should go to the only lobster seller in the island, Pak Rito. We went to his house and ordered lobsters for tomorrow's dinner. Pak Rito said fishermen sold lobsters to him when there was order. In front of his home, he was constructing a pool, to collect the lobsters. He priced 400,000 rupiahs per kilo for lobster less than 400 gram each, and 500,000 rupiahs for bigger lobsters more than 500 gram each.

About 8AM, we started the tour. Our first stop was Maratua Island, the biggest island in Derawan Islands. We visited Maratua Paradise Resort to have photo time, then tea time. The beach was so beautiful and the sea water was crystal clear we could see fishes swimming in the water down there.

The next stop was my top highlight, the jellyfish lake of Kakaban Island, the world famous lake. It was said there were only two places in the world with stingless jellyfish, the other was in Palau.
We were supplied with snorkeling mask then started swimming with the brown cute jellyfish. There were so many jellyfish in the lake, most of them were the brown ones and few of them the white ones.

After satisfied swimming with the jellyfish for long enough, we went to the third island of the day, Sangalaki Island, where there was turtle farm. We could see and touched baby turtles in the pond in the island. Sangalaki Island was not inhabited, though there was a resort and turtle farm, so the white sandy beach was so clean.

We enjoyed our lobster dinner that night.

We were supposed to leave at 4AM in the morning to go to the whaleshark location, since the trip will take 2-3 hours. However, since the wind was big, we waited for about half an hour and decided to go despite the big wind.
The trip was a torture, my spinal bones were like shattered due to bumpy journey. My butt hurt since there was no cushion on the chair. I sit next to the driver in the front that I suffered the bump the most.

The torture turned into exitement when our captain said we found the whalesharks. He stopped the boat next to a big big platform boat where they catched small fish. The whalesharks were swimming around the platform since the fishermen on the platform threw small fishes for the whalesharks. We prepared our snorkle and jumped into the water. First, though we knew that the whalesharks were not dangerous, it was quite scarry since the size was super big. One whaleshark swam direct towards me, but skipped away without me doing nothing. The sharks swam so close that I could touched them. Was a great experience for us and was happy I could take good photos of the sharks under water with my waterproof Nikon Coolpix.

Our next stop was a small and flat island with beautiful sandy beach. There were some trees in the island. We took lunch there. Sadly many rubbish on the island.

The last stop was the furthest, called Labuan Cermin, or literally Port of Mirror, famous for crystal clear lake. We had to change to local tourist boat to enter the lake. We did snorkling in the clear water. The lake was said to be two layers, salt water and fresh water. It was so clear that we could see the fallen trees in the deep bottom of the water.
We took another 2-3 hours journey back to Derawan Island, where we spent our last night there.

We woke up 5 o'clock in the morning and walked to Derawan Dive Resort in the east edge to see the sunrise which was quite beautiful.
At 9 o'clock sadly we left the beautiful island with beautiful memory in our heart. 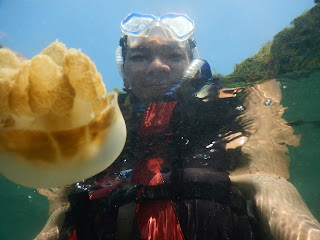 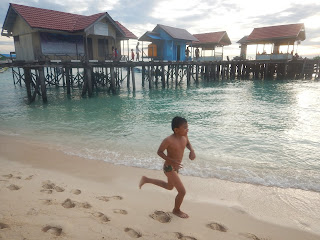 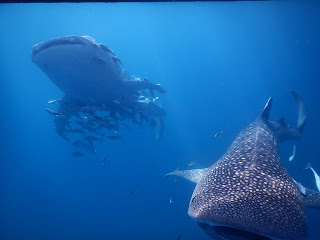 Negative sides:
- Many jellyfishes in Kakaban Island were died or injured by people kicking or hitting, either by accident or on purpose.
- Derawan Island is getting more and more polluted, heavily inhabited. With more and more tourist and the increasing inhabitant, I doubt the island can survive. People drained the used water directly to the sea and more rubbish were thrown to the sea. Education on environtment is a must before the island becomes rubbish island. Hopefully the less inhabited Maratua Island and uninhabited Kakaban and Sangalaki Islands will stay clean for a longer time, enough only Derawan Island is sacrificed for the tourism.
- So sad seeing many forests in Kalimantan were burnt for palm farm on the way between Berau Airport and Tanjung Batu Port. The home for orangutans were demolished for the sake of palm oil business.

Email ThisBlogThis!Share to TwitterShare to FacebookShare to Pinterest
Posting on 05. Out of Surabaya

IKIRU is a place to live/stay in Surabaya in an Indonesian "kost" / "kos" or "guesthouse" or "homestay" or "hostel" or family-run style hotel.
EnglishBahasa Indonesia日本語

Things to Do in Surabaya

traditional rickshaw you can find around IKIRU Guesthouse

IKIRU is a Japanese word meaning "to live".

To provide a clean and cozy place to live for people coming to Surabaya is our main purpose.

Hi, call me MJ (web name), the first son of the family. I am a world backpacking traveler, been to 110 countries. I live in Japan for the moment.
This is my blog.